If you would like to see The Goodsyard scheme approved, please consider sending your support to the Mayor of London.

Hammerson and Ballymore have been working with the community since the initial stages of the masterplan, engaging with over 2,500 local people since 2011. Thanks to the significant feedback received, the masterplan has evolved over time and amendments to the existing planning application were submitted to the Greater London Authority (GLA) in October 2019, and further minor amendments in June 2020. For information on the amendments, please see the Submission section of our website.

If you would like to support the Goodyard proposals please email your comments to the GLA at bishopsgate@london.gov.uk

The refreshed approach to the Goodsyard includes:


If you would like to support the Goodyard proposals please email your comments to the GLA at bishopsgate@london.gov.uk

Please view the video below to find out more information on the redevelopment of the Bishopsgate Goodsyard:


Please click on the image below for more information on the Goodsyard redevelopment local benefits: 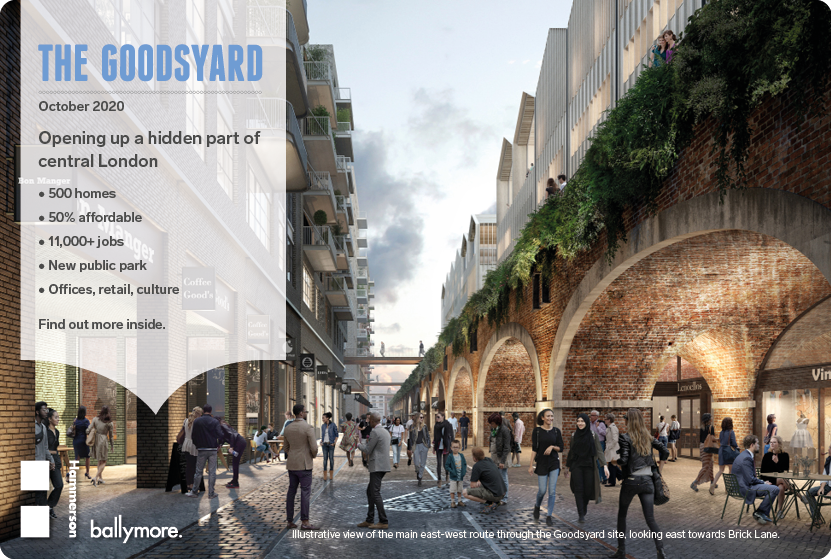 The redevelopment of the Goodsyard will deliver a number of key benefits for the local community:

The Goodsyard is the name of the former Bishopsgate Goods Yard site, surrounding Shoreditch High Street Station. It is approximately 4.4 hectares in size which is the same as about 7 international football pitches.

Sitting between Shoreditch, Banglatown, Spitalfields and the City Fringe, this unique site has been derelict since a fire in the 1960s. In April 2010, Shoreditch High Street Station opened in the centre of the site and there are currently two temporary uses on the site; Powerleague football pitches and Boxpark, while the developer, a joint venture between Hammerson and Ballymore, has brought forward its plans for what is one of London’s last major brownfield sites.

The Goodsyard has been identified in planning documents at local and regional levels as a major opportunity for regeneration and has had a long history of development proposals and consultation.

Proposals for the site were most recently brought forward in 2014 when applications for the comprehensive redevelopment of the site were submitted to the London Boroughs of Hackney and Tower Hamlets. In 2015 The Mayor of London called the applications in and directed that he would act as the Local Planning Authority. In April 2016, the Greater London Authority (GLA) Case Officer’s Report recommended the planning permission should be refused. The Mayor agreed to defer the determination to allow Hammerson and Ballymore further time to evolve the design and work with the GLA planning officers to respond to comments.

Since then the team has been carefully considering the feedback on the applications and following constructive conversations with key stakeholders, the Joint Venture has now submitted proposals for the site. This approach includes important amendments to the planning applications.

Between July and December 2018, Soundings carried out community consultation in the local area to share, debate and inform the updated proposals for the Goodsyard site.

Further engagement then took place in March 2019 to share the Updated Masterplan ahead of amended planning applications being submitted to the GLA in October 2019, with further minor amendments submitted in June 2020.

The project team is led by Hammerson and Ballymore, who together are commonly referred to as the ‘Joint Venture’ or ‘JV’. The team includes a wide range of experts in many disciplines and local design partners.

Please click here to find out more about the JV and design team.

‘From then to now’ please click on each topic below to find out more:

6 Evolution of the proposals

We would like to thank everyone who has taken part throughout all stages of consultation informing the Goodsyard proposals.

The most recent engagement took place in November 2018 and March 2019 on the updated proposals for the Goodsyard and a report has been produced summarising the feedback received – 2019 Statement of Community Involvement, Addendum. This document is available to view or download here and sits in addition to the 2014 Statement of Community Involvement and 2015 Addendum.

Following review of all feedback received, the Joint Venture submitted revised plans to the Greater London Authority (GLA) in the form of amended planning applications in October 2019, with further minor amendments submitted in June 2020. Details on the applications can be found under Submission.

Submission of the Amended Applications
In October 2019, the Joint Venture submitted the amended planning applications for the redevelopment of the Goodsyard to the Greater London Authority (GLA) with further minor amendments submitted in June 2020. As with the original submission, the Mayor of London is the decision maker for the applications. For a detailed history of the applications, please see the Evolution of the Proposals section of the website under Project Background.

The Proposed Amendments
The submitted application reflects feedback from two rounds of community engagement on the updated proposals in 2018 and 2019 and further discussions with the London Boroughs of Hackney and Tower Hamlets and the Greater London Authority (GLA). The updated proposals include:

Additional Amendments Submitted June 2020
Following the initial round of statutory consultation for the amended applications held in December 2019, a request for further information was made to the JV by the GLA. In response to this, the JV has submitted some additional and replacement documentation which include some minor amendmends to the applications. All of the updated documentation will undergo a second round of statutory consultation to be undertaken by the GLA.

Following statutory consultation, the Boroughs of Hackney and Tower Hamlets will hold independent Planning Committee meetings on the amended applications and will then submit recommendations to the GLA. A public hearing will then be held at City Hall where the Mayor of London will preside over the amended planning applications. This is likely to be held in late 2020. For further information on the public hearing process, please visit the GLA website.